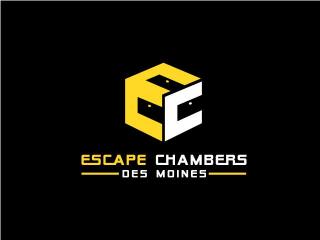 Escape Chambers is the first and only live room escape game in Des Moines. This game requires you and your team to solve mysteries and clue. Located at CMP

You have 60 minutes, can you escape? Padlocks and puzzles and passcodes, oh my! Like a scene straight out of National Treasure, Saw, or The DaVinci Code, it?s a race against time at Escape Chambers DM. Escape rooms are popping up all over the world. From Nashville to San Francisco, to Toronto and Singapore?people from all walks of life are testing their mental limits to escape before time runs out. The adrenaline-pumping experience at Escape Chambers DM is no exception. Deciphering coded messages, searching high and low for clues, finding the necessary tools in the most unlikely of places, and navigating the sophisticated and complex scenarios, Escape Chambers DM is like nothing Des Moines has ever seen. Riddled with secret passageways and hidden rooms, each group must work together to beat the clock and crack the code. While scenarios will differ in difficulty and intensity based on the individual, there is no shortage of pulse-racing excitement at Escape Chambers

Esteemed professor of modern world history, David Morgan D.A., has been called upon numerous times, by the FBI, as both a consultant and expert witness, in a string of recent historical document theft cases. A new link has been established between each of these cases and, given the historical significance of the stolen items, it is now believed that Prof. Morgan, himself, has been the mastermind behind the entire network of thefts. You, and your team, have been sent in, undercover, to bring him down. As a flight risk, you will be required to work quickly to gather the necessary evidence, and get out, before Morgan returns from class and you are found out. Consequently, should you fail, the US Government will disavow all information regarding this assignment and you, and your team, will be issued burn notices.

Congratulations. You and your fellow agents have been hand-picked by top-brass to take part in the final selection for a “Blacklist” division of the CIA, known as NICO (North American Intelligence and Counterterrorism Operatives.) You will be evaluated across a spectrum of mental exercises & stress-induced problem solving scenarios. You will be pushed to your limits, providing your instructors with information necessary to determine which among you are deserving to become NICO. As this is a division that does not exist, operated by people who do not exist, housed in facility that does not exist…should you fail, any memories of the experiences related to your time here will, likewise, cease to exist. If you succeed, however, you will become a ghost in the system and will operate behind the scenes, shaping the future of the entire world while leaving behind nothing but dust and echoes

It was all a setup. The dealer was in on it....the other high rollers at the table were in on it.....even the waitress played her part. They took you for everything you had. Unfortunately for them, you have a plan to take it back....with interest. You call up a few "business associates" and explain the job. They all think you're certifiably insane.....and they all want in.


Flickering fluorescent lighting is the first thing you notice as you open your eyes. Groggy and confused, you try to take in your surroundings, as you struggle to fight this hangover from Hell. It doesn’t take long for the scene in front of you, to render itself in wide-eyed resolution. Unless you, and the other people here, can find a way out of this godforsaken place before “He” gets back…..you are all going to end up like those poor bastards hanging from the ceiling. You have to focus…whatever you do, don’t panic. Panic and you’re dead. As you say, to no one in particular, “Don’t let me die…not here…not today…not like this.”

Always looking for new ways to entertain his friends, Simon a lifelong enthusiast of puzzles, riddles and the like has gathered all of you together today, for a party at CMP Des Moines. As expected, you know this will be anything but ordinary. As the last guest arrives, the door to the party room locks and a countdown timer appears: 60 min. The timer starts counting down, Simon Says, “Escape”. Can you make it out in 60 min?

“Stingray, do you copy? Please advise. Over” “Affirmative, Viper Team… Warthogs inbound. Wheels up in 60. Over.” “Copy that Stingray. Ground troops have diverted all hostile fire away from the bunker… awaiting clearance.” “Clearance granted Viper Team… hold position until NICO finds… well, whatever the hell it is they are trying to find.” ‘Roger that Stingray… Viper Team out.”