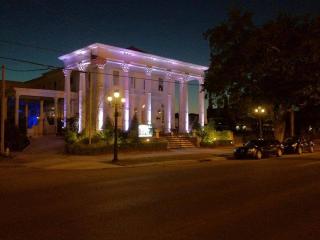 Think of this as a play with super sleuthing, puzzle solving and mysteries.

In ordinary theaters, the audience is seated while the action continuously unfolds on the stage in front of them. In this game it is a bit like going to a theater in the round with the stage that encompasses the entire theater and having the interactive action sporadically occur all around you. The best part is… YOU are the star. You don’t just sit back and watch the show, now you are part of it, 100%.

You have 60 minutes to escape a room. Up to 12 participants will enter a room. The question is whether they can beat the clock? Find clues, decode riddles, and solve puzzles in order to unlock the escape door. Every Escape Room is unique and has a different theme and storyline behind it. You will randomly find our clues, in no particular order, so you must figure out how they go together to help you and your team escape the room.
It is the most intense hour you will ever experience. Tick, Tock, Tick, Tock… Time flies as the clock winds down, the pressure mounts, and the adrenaline builds.

I trust you are all wondering where you are. I’ll tell you where you might be. You might be in the room you die in. Two hours from now, the doors of this lair will open. Unfortunately you only have one hour to escape.

Deep within the bowels of the Mansion’s basement, you and your friends will be thrust into a “Jigsaw-like” serial killer lair. Here you will be watched and tormented by an unknown stalker. Experience a series of traps set by the killer. Solve his riddles and pass his tests to unlock your freedom. Otherwise, he will catch up to you in an hour. Do you have what it takes to survive?

We’ve traveled the world collecting a host of rare mystical artifacts. From the darkest parts of Africa, to the farthest reaches the Amazon, across the islands of the South Pacific, and to all four corners of the Earth we have traveled finding rare treasures for your pleasure.

To find the key to escape, you must outwit Morto, the puppet the Clue Master, by locating numerous clues and solving his riddles. Here you’ll find such rare artifacts as a Werewolf Anatomical Research Case, A 1800’s Vampire Hunting Kit, the remains from a Fiji Mermaid, just to name a few. Explore the rooms and discover its secrets to open the hidden escape door.

THE EMBALMING ROOM ESCAPE FROM A ZOMBIE

Hidden in the room is the key to escape. To find the key you must outwit the Clue Master by locating numerous clues and solving his riddles. The Zombie’s chain will be slowly released little by little over the hour. Before time expires, the Zombie will be able to catch up to you.  You have 60 minutes to uncover the clues, decipher riddles, unlock the door and escape the room without being touched! If you are touch by the Zombie, you’re dead! You have to sit out for the rest of the hour. You can participate verbally, but you can’t physically help your team. Your group of 12 players must solve the room before the time runs out and the zombie is unleashed. Brains, Brains, Brains!!!

Take the elevator to the Houdini Séance Chamber on the top floor. Participate mistakenly in summoning a ghost. Uncover clues, decipher riddles, and discover hidden keys to enter The Ghost Lab. Capture and contain a Poltergeist in the Ectoplasmic Containment Unit! Solve the mystery by releasing the spirit to cross over into the afterlife or fail and the entity will seek revenge and follow you home!

Are you ready for an adventure mates… straight to Davy Jones’ Locker? Well shiver me timbers. Explore the caverns along Barataria Cove where the likes of Jean Lafitte once sailed and buried his pirate treasures. Find the treasure map, follow the clues, solve the riddles, and find the treasure before escaping in an hour! Blimey!