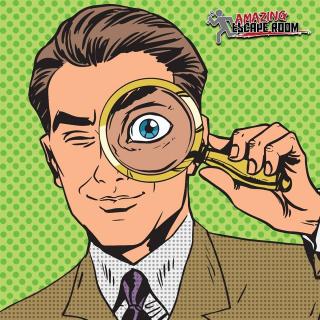 About the Game Rooms

Our game rooms are thematically different, but there are common things in each rooms. Here are the main points.

Every keys and codes are inside the room.
There are dead ends in every room.
There is a panic button in each room, in case you want to leave it earlier.
If the time runs out, the door opens and the gamemaster lets you out.
There are cameras in every room so the game masters can watch you play.

And there is also a display in every room, where you can see the countdown, and it gives you some hints if you get stuck at some point of the game.

First of all, you need to be interested in such a challenge. You and your team have 60 minutes to escape from a locked room.

The escape game genre started out as a series of point-and-click computer games where players must escape from a locked area by using the environment around him/her. AMAZING ESCAPE ROOM is a live version of this where you must physically search the environment for items and clues that will help you escape. You are given 60 minutes to try and escape before your fate is sealed.

It’s the midst of the current war, and your team of soldiers are in desperate need of cover. You run into a nearby bunker in hopes of gaining stability and regrouping, but safety is all but near. As the door shuts behind you, the door locks hard, triggering a sixty minute timer for the Weapons of Mass Destruction that will detonate when the clock hits zero. Under new orders, it is up to your squad to discover who is related to obtaining the WMD, and ultimately stop the bomb from launching. The stakes are high, and the clock is ticking fast. Good luck, soldiers

The night is young, the town is alive, and you and your friends are dolled up in your glad rags, just itching’ for a good time. As the prohibition of the 1920’s is in full swing, you take to the secretive speakeasy located under a quiet apartment building to get your juice fix. Unfortunately, the gunshots outside mean trouble, and the police are now on their way. Your instincts tell you to run into the boss’s office, but you soon realize that this mobster-boss has the place rigged. It’s only a matter of time until you’re in handcuffs!

Your memory is foggy, and your whereabouts are unknown. The night before, you and your group attended a mysterious underground club named Club Seeing Eye. Now, you have just woken up in a seemingly colorless room, aptly named The Black and White Room. This is where you discover that you a merely small test subjects in a much larger governmental experiment, and that you may have not woken up at all.  Do you have what it takes to prove you’re worthy of escaping, or will your subconscious be condemned to the Black and White Room forever? The Triangle Corporation greatly appreciates your contribution.

It’s 1976 and the LAPD has asked you to help Officer Habersham build evidence for a case against notorious crime boss Jerry Ash. There’s only one hour until he boards a plane to South America where he’ll be out of reach to American law enforcement. You are headed into the back area of Ash’s Los Angeles nightclub, The Starlight Lounge.

Can you find the missing evidence and piece together the story before it’s too late.

Mystery Of The Red Dragon

You are a team of Interpol Investigators hired by the Asian Art Museum to track down a priceless and ancient sculpture, The Red Dragon. It was mysteriously stolen in-route from Beijing to the Asian Art Museum in San Francisco. A month of following clues has lead your team to the home of a Mr.Frederick Cromwell, an esteemed rare-antiques dealer who is suspected to have made millions stealing priceless artifacts. Infiltrate Mr.Cromwell’s private residence, retrieve the stolen Red Dragon and escape undetected before he returns home in 60 minutes!