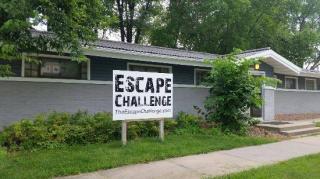 The Escape Challenge is a real-life room escape game based on the popular computer and mobile phone escape games. After entering a room with your team, the door...

You must work together in order to find clues and solve puzzles that will lead you to your escape. It is part scavenger hunt and part puzzle game. Only about 20% of groups are able to meet the challenge and escape in time!

Mission One: The Norwegian Job
Your team of thieves completed a heist in Oslo, Norway.  The heist was a success and the team was making their getaway with $16M of gold, diamonds, and cash.  During the escape, one of the members of your team, Steve Norton, turned the table and stole everything for himself. Steve left your team for dead, and assumed you had no chance of survival.

But he was wrong.

One year later, you've tracked Steve to his new home in Rochester, MN.  You have reassembled the team.  You have secured a window of one hour to break into Steve's home office.  Your team has a way in, but once inside, the door locks behind you.  You must complete your mission, and find the way to unlock the door from the inside before you are caught by Steve and his guards.  Can you complete the mission and escape in 60 minutes?

Your team is a Special Task Force tracking a cartel across the border.  One month ago your Lt. Bob was captured.  You have been working to find the location where he is being held, but he hasn't been heard from in over a month.
Part of your team has now been captured.  They are being held captive at a cartel safe house.  It is up to the remainder of the team to rescue the people being held captive.

The rescue team has found the location where their team members are being held.  They can get into the safe house during the guard change.  They will need to find a way to get the prisoners out of their handcuffs, and the entire team will work together to find a new way out of the room.
You will have to select part of your group to be the captives, and the rest will be the rescue team.  The captives will be handcuffed behind their back.  Make sure that about half of your group is willing to be handcuffed.  There is still plenty for them to do while handcuffed.
If this is your first escape experience, we recommend our Norwegian Job room.  The fact that you start in separate rooms, along with the handcuffs, add a little difficulty to this mission.  The puzzles aren’t more difficult, but the communication aspect makes it more challenging