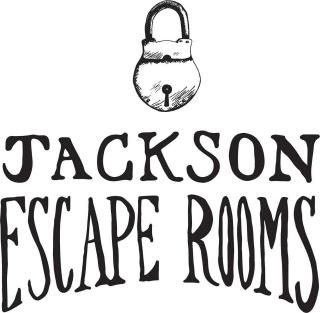 Escape rooms are an immersive, interactive, team-based, life-sized, puzzle solving adventure game where participants are locked in a room and must escape.

For $10 a person, teams of 6 individuals gain access to a Jackson Escape Room and must rely only on their wits, attentiveness, inventiveness, and resourcefulness to get out. Brains. Not brawn. Only the most clever of teams will beat the clock and navigate the subtle clues, clever riddles, perplexing puzzles, and maddening mind games that must be hurdled in order to find the ?key? and set themselves free.

Mastaba
INSPIRED BY A DARK PAST

Mastaba has been on the loose for years.
(8-12 players recommended)

We decided to build the perfect room for folks who have never played before. But, be warned, even though this room is the best place to start, it is by no means a walk in the park!
The beginning of your addiction to Jackson Escape Rooms starts in The Jackson Escape Room and ends only when you have tackled everything we have to offer in our bag of tricks!
Come with all five senses fired up and ready to contribute to this fun, family-friendly battle of the wits!
(4-6 players recommended)

Same method.
Same motives.
Same murderer.
Can you solve the crime and find the widow's prize possession before the perpetrator absconds?
Pay close attention. Your investigative detail has been infiltrated and the intrigue is on.

Fenn’s legacy was always going to be his art and poetry. Money, even in abundance, was so common and unimaginative.

Unless it was a huge sum of money, buried away in an undisclosed location, with only the faintest hints leaked in poems, paintings, and obscure video clips.

With life slipping away, Fenn decided his legacy would belong only to those clever enough to discern the location of Fenn’s Cabin — so he agreed to a quick, rambling, almost incoherent interview on public radio….

Your friends have NO CLUE what you are going off about, all they know is that you’ve loaded them into you old van and headed up into the mountains.
It seems foolish and crazy — especially with a blizzard barreling down — but you’ve got an crazy idea and it could pay off big time.